This Spring, CCOM launched an initiative to introduce local students to the natural wonders of our area. With funding from the Andrew Sabin Family Foundation and Parks & Trails New York, we began a four-month Environmental Internship program with seven sophomores and juniors from East Hampton High School. Our interns are working with National Park Rangers and natural experts here on the East End to host a series of bi-lingual trail walks for the community this summer. The East Hampton Press recently published an article about our internship program that we share with you here: 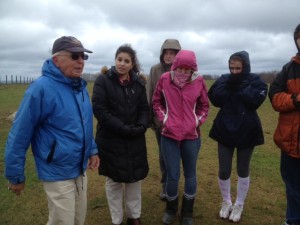 A rainy and windy Saturday in Montauk didn’t deter a group of East Hampton High School students from participating in a new program that will provide them with the tools to lead bilingual trail walks on the East End.
The program, hosted by the Concerned Citizens of Montauk, a 40-year-old non-profit organization, held a workshop on Saturday morning at the Montauk Library with rangers from the National Park Service to educate high school students on ways to lead successful and creative trail walks in both Spanish and English.

The students, who will be considered interns, were selected through a competitive application process open only to sophomores and juniors at the school, according to a February statement issued by CCOM announcing the program. The applications were due on February 13. 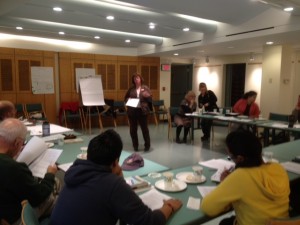 As part of the program, the students will learn how to research and write trail informational brochures and lead a series of walks in Montauk conducted in both English and Spanish, according to the statement.
Jeremy Samuelson, an environmental advocate for the Concerned Citizens of Montauk, said in a February interview announcing the initiative that the group’s goal is to make environmental programming available to all members of the community. With a Latino population that ranges somewhere between 20 and 25 percent, depending on what figures you look at, “environmental protection can’t  afford to focus only on 75 percent of our community,” he said at the time.

“We have to find ways of inspiring the next generation to understand their role in environmental protection and then take that message home,” Mr. Samuelson said. “And that applies for all of us. Whether you speak English, Spanish or French—or any other language, the  kids in school have to be inspired and then take the message home.”

The students will be paid a $500 stipend, Mr. Samuelson said. The funding is being provided as a donation from the Andrew Sabin Family Foundation, he said. The students will host a minimum of five walks during the spring and summer seasons.

Last Saturday, the students began their education at Camp Hero State Park in Montauk. Clad in colorful coats, the students listened to presentations from Mr. Samuelson, Frank Quevedo, the executive director of the South Fork Natural History Museum and Nature Center and National Park Service rangers while standing near the cliffs overlooking the ocean.

Before heading out to Camp Hero, the students were encouraged by National Park Service rangers in a training session to use their creativity and “sparkling talent” in hosting the trail walks.

“Expect to grow this summer,” said Sheridan Roberts, a National Park Service ranger. “That’s going to be the fun part.” 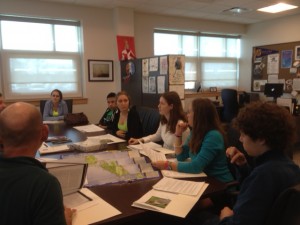 As for the students, many said they applied to the program because of a desire to keep the love of nature alive among their peers. Sarah-Jane, 15, said she grew up in Les Rouges-Eaux in France, where she fell in love with the area’s natural beauty. “It was always nice because every landmark we visited, there was a story my grandmother told,” she said. “I just wanted to experience and feel the same thing here in Montauk.”

Other students echoed Sarah-Jane’s sentiments about nature. Melissa, 16, who was born in and raised in Montauk, said she wanted to learn more about her hometown’s natural surroundings. She said she wanted to “experience more than just the beaches and what everyone else sees.”

The students also spoke to a declining interest in natural resources among their generation, who would rather watch television or play video games. “A lot of people just don’t care about the environment and nature,” said Miles, a 15-year-old student. He said his love for nature grew through various family vacations to national parks across the country.

Shana, 16, said she grew up walking the trails in Montauk. She also said she loves the area’s natural beauty—something she doesn’t think that her generation takes advantage of. “I think it’s important that there’s a next generation of land conservatives,” she said.

It’s an adult’s obligation to foster a love for nature among the youth, and that’s what the program aims to do, said Mr. Samuelson.